Flashback Friday: The Weight-Loss Program That Got Better with Time "The Weight Loss Program
That Got Better with Time" The CHIP program may
be the most well-published community-based lifestyle
intervention in the medical literature, and one of the most effective with
clinical changes approaching that achieved in live-in residential
lifestyle programs. Encouraging people to transition towards
a more whole food plant-based diet achieved blood pressure benefits
that were greater than those reported with the DASH diet, and
comparable with the results in blood pressure-lowering drug trials. If we're going to reverse the worldwide
chronic disease epidemic though, we've got to scale this thing up. So to make the CHIP program more
accessible to a wider audience, each of Hans Diehl's live
presentations were videotaped. Then you could just have a volunteer
facilitator get people in a room and watch the videos,
help foster discussion.

When it comes to safe, simple,
side effect free solutions like a healthier diet and lifestyle, you don't need to wait for a doctor
to show up and give a lecture. Yeah, but does it work? Look at these numbers
for those that came in, the worst of the worst,
and finished all the videos: 20-point drop in blood pressures,
40-point drop in LDL, more than a 500-point
drop in triglycerides.

Those that came in with diabetic
level fasting blood sugars, about 1 in 3 left with
nondiabetic fasting blood sugars, and all they did was empower
people with knowledge. Just encouraging people to move
toward a whole food, plant-based diet led to these remarkable benefits. How about the effectiveness
of this volunteer-delivered lifestyle modification program
on 5,000 people? Same kind of significant reductions in weight, blood pressure, cholesterol,
triglycerides, blood sugars. Most studies giving dietary
advice to free-living subjects can be expected to reduce total
cholesterol by only about 5%. But, hey, a sustained reduction of even
1% may result in a 2 to 3% reduction in the incidence of heart disease, so on a population scale, even
the small differences matter, but put thousands of people through just
one month of CHIP and get an 11% drop on average, and up to a nearly 20% drop
among those who need it the most.

Yeah, but do they maintain
their healthy habits? I mean, doctors can't
even get most people to keep taking a single
pill once a day. How effective is a volunteer-led
video series going to be at getting people to maintain
a change of eating habits? Researchers looked at
the CHIP data to find out. How were participants still
doing 18 months later? Most were able to maintain their
reductions of meat, dairy, and eggs, though some of the junk food
started to slip back in, and their fruit and veggie consumption
dipped, though not back to baseline.

But here's the huge shocker. Even though they were explicitly told
to eat as much as they wanted, no calorie or carb counting,
no portion control, just by being informed about the
benefits of centering their diets more around whole plant foods, by the end of the six-week program
they were eating, on average, about 339 fewer calories
a day without even trying. Instead of eating less food, they
were just eating healthier food. OK, but that was right at the
end of the 6-week program when they were all jazzed up. Where were they 18 months later? Anyone familiar with weight loss
studies knows how this works: you can excite anyone in
the short-term to lose weight using practically any kind of diet. But then six months later, a year later, they tend to gain it all
back or even more. Yeah, they were eating about 300
calories less a day during the program, but 18 months later were only
eating about 400 calories less.

Well, wait. What kind of diet can work
even better the longer you do it? A whole food plant-based diet. Many weight loss programs restrict
calorie intake by limiting portion sizes, which often results in
hunger and dissatisfaction, contributing to low compliance
and weight regain, but the satiety promoting
all-you-care-to-eat plant-based whole food dietary approach
may be the secret weapon towards sustainable weight loss.. 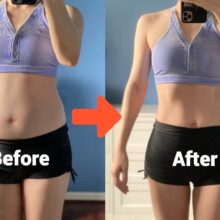